Android applications run in a native Linux process, in the underlying Linux OS. This process houses activities (screens), widgets, and services (non visual long running application parts). When working with Android apps, it is important to remember to keep long running code running in threads that are not tied to the main thread or event dispatch thread, in order to get an “application not responding” error. A common mistake that is made is long running tasks are performed in this EDT/main thread, and this leads to lots of application failures.

What is the EDT or main thread? # 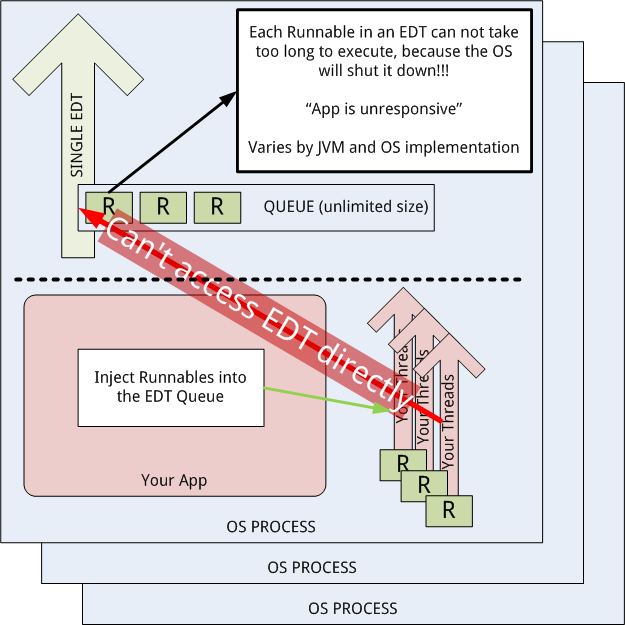 This picture outlines what the role of the EDT or main thread is (I will refer to it as the EDT from now on). All UI operations are performed in a single thread in the native Linux process. This is pretty much the way all graphics on desktop and mobile platforms are performed. This single thread of execution is called the EDT, and it is spawned by the OS when you have a graphical app (as opposed to a command line app or an entirely non visual one). All UI operations, paints, updates, etc. are done on this thread, and it is important to keep long running, high latency tasks off of this thread of execution. Eg, it is a bad idea to resolve a URL and load content over HTTP in this thread.

In order to combat the single threaded nature of the EDT, a simple event dispatching model is used. In Android, this is implemented using Handler and Looper classes. It goes something like this, if you want the EDT to do something, create a Runnable and inject it into the EDT’s task queue. The EDT will then process this Runnable, when it gets around to it. You can’t mess with this queue, except to “post Runnables” to it. Alternatively, if you have a long running process that must do something in a non-EDT or background thread (BGT), you have to post a Runnable that then injects the results of this long running background task to the EDT at some point. This is encapsulated by the Android AsyncTask class.

Based on this event dispatch model, there are a few patterns that emerge, that are reusable across a large variety of applications.