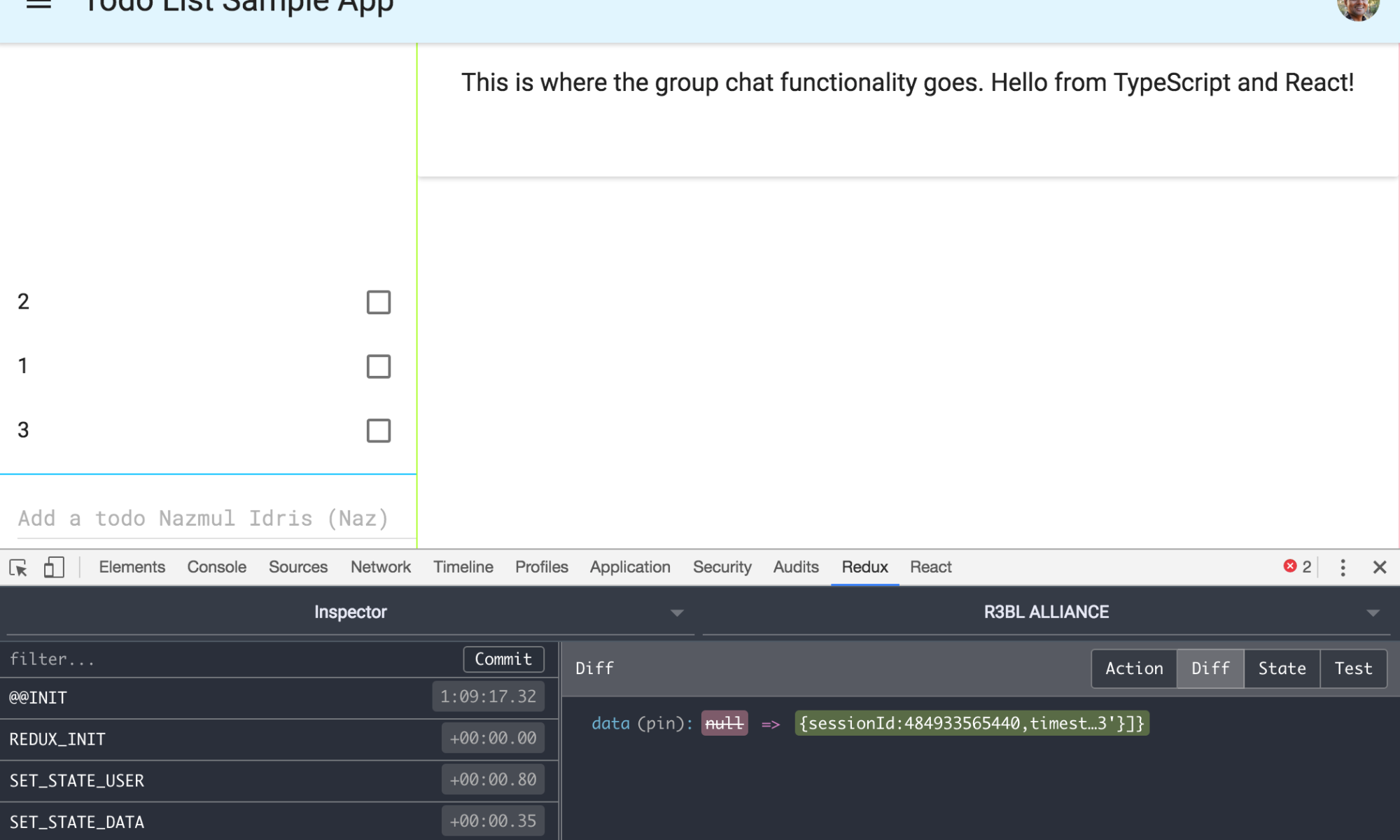 This tutorial is mostly about Redux. And it’s based on this tutorial which goes into details around the starter project that I created to tie together React, Firebase, and Material Design to create a lightweight but real world starter project.

Here’s the code on GitHub for this project. The core technologies used in this starter project are:

Please note that is not for beginners, but is more for someone who knows these technologies and wants to put them together into real world applications. If you want to get started with the basics, here are some goodresources:

What does this project actually do?

To see it in action, see it deployed on heroku. This project is a simple todo list app that stores its data in Firebase. It uses Redux to manage the internal state of the application. And it uses Material Design and Flexbox layout for the UI, along with React. Additionally, it supports signed in users, so that all the data is stored on the user’s behalf based on their social identity (anonymous auth and Google sign in is supported via Firebase).

When the app first starts up, you will be able to create todo list items. These are saved for the anonymous user that’s automatically created when the app launches. This is explained in more detail below in the Firebase Auth section. When you click on the user icon on the top right hand corner of the app, you will be asked to connect the app using your Google profile (via OAuth 2.0), which is handled by Firebase Auth as well. Once you provide your authorization, it will copy the todo data to a new account that is permanent and tied to your social identity. If you then sign in to this app from any number of machines, the same todo data will be available everywhere. As you make changes to this data (in real time) you will see these changes appear everywhere that you have the app running (as long as you are online on those machines). 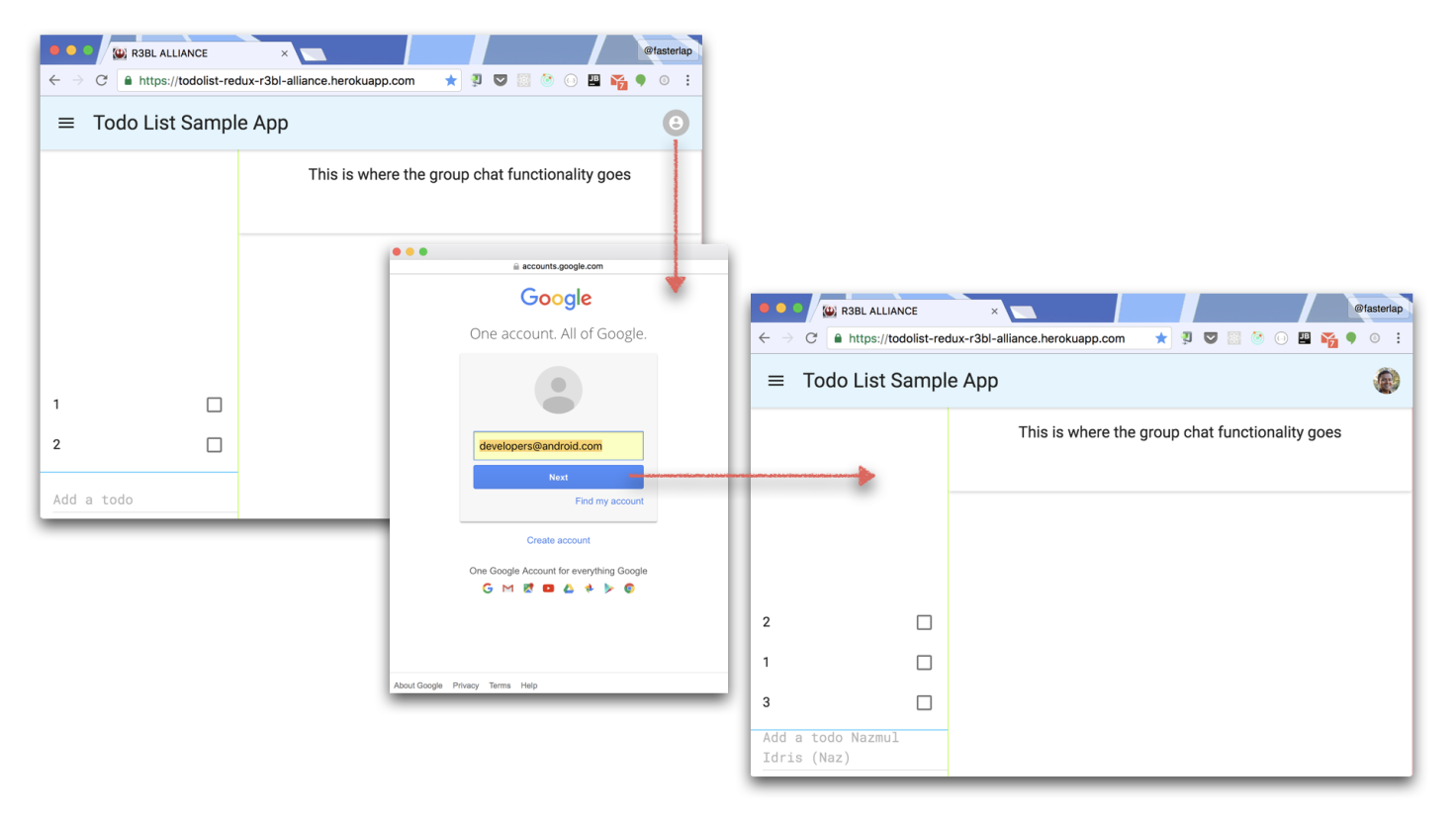 Setting up your environment #

Please refer to this non-Reduxtutorial to get your environment setup. The biggest change in the Redux version of the project compared to the non-Redux version here is that I’ve changed webpack settings to make Typescript work in all the source files in the /client folder.

Your map of the code #

You will find the following packages in the src folder:

Note that Typescript now works in any of the client/ folders. So you can create TSX files (React Files that use Typescript). An example is provided in test.tsx that you can check out for yourself in the code.

There are some key concepts that are important to grok when using Redux. The idea is to manage the entire state of your application in a single place. This means that the entire object model that comprises the representational state (in its entirety) of your application at any given moment in time is in one place. And it’s immutable.

You might be thinking, if it’s immutable, then how do I change it? In order to discretely change state from one point to another, you have to apply actions to your object model or Redux state (which is kept in a Redux store). What is an action? An action simply has a name and a payload. These actions are dispatched to the Redux store, in order to make changes to the state. Every time an action is applied, an entirely new state is created and stored in the Redux store. This new state is then propagated by Redux to all the objects that are interested in these state changes (which in this case are Redux components).

There is another thing that Redux introduces, and that is the reducer. It’s more like a state mutator. The way reducers work is that you give them the current state and the action, and they will do some work to mutate this state and give you an entirely new state! There are a few constraints in what these reducers can’t do (eg: they can’t call network operations or do anything outside the bounds of the local execution environment).

There are many advantages to using Redux, the most important of which is greater reliability of your application’s runtime behavior. It helps you create more stable apps and allows you to track changes that are being made to the application state in a single place. This makes it easier to see what is happening to your app. The notion of immutable state is something that takes a little getting used to.

Think of it this way, you don’t just change the state of your application. Instead,

So in order to setup Redux, you have to do the following:

Here’s code from context.js that does just this:

This is what the code for the actions looks like:

This is what the code for the reducer looks like:

Here’s an example of a reducer that toggles a selected todo list item’s done state:

When you want to use it in React, you have to:

Here’s code to connect React to Redux. The following snippet is from main.js.

The following snippet is from app.js.

This code will bind the actions to the redux store’s dispatcher. You can learn more about how this works by looking at the bindActionCreators implementation in context.ts. Here is how you use these actions in React, by simply getting them out of props.

Whew! This probably sounds really complicated, and it is at first. However, this boilerplate stuff is handled on your behalf and it’s not really verbose. In the case of using Event emitters to manage application state, one disadvantage is that we would have to create listeners when a React component mounts and then detach them when it unmounts. We don’t have to do any such wiring. Since it’s all handled by Redux. Also, in the Event emitter example, we had to explicitly create React state objects to handle the data that we get via event emitters. In Redux, we don’t have to do this, since that is what the Redux state does for us!

I encourage you to review the non-Redux and Redux versions side by side so that you get a sense for how things are different in the Redux example. In fact, if you go back in version history in the Redux example, it actually starts off without Redux and with every new check-in, the project is Redux-ified. Please review this commit history to see this. 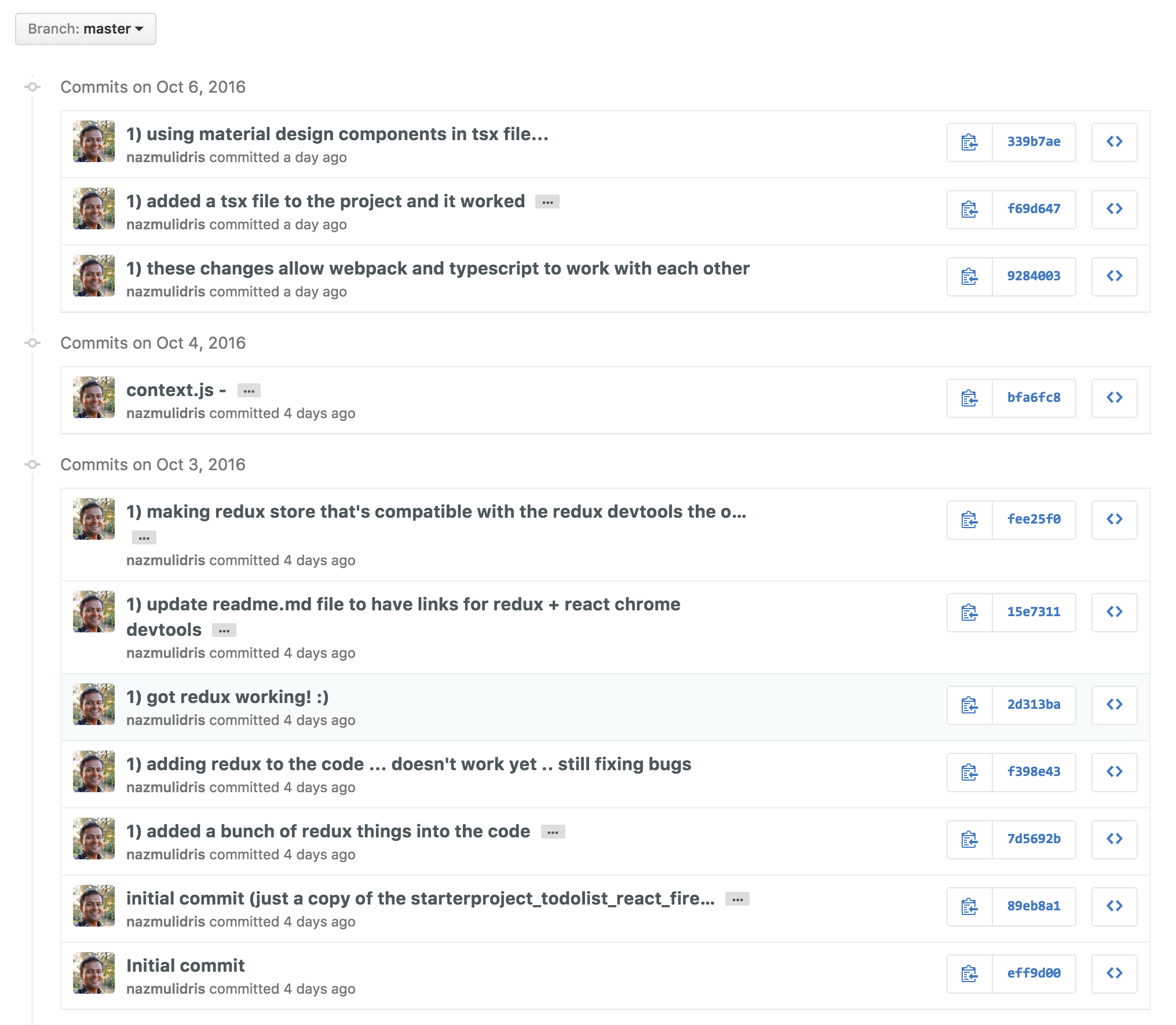 Lodash is pretty awesome. It’s used in this project, learn more about it here.

If you use Chrome, the React and Redux Dev Tool extensions are very useful:

The following is what the Redux chrome dev tools extension looks like. It is invaluable in debugging and it walks you thru all the state changes that happen and the actions that caused them. And it gives you Diff views or absolute State views of things, which is very useful for debugging and understanding how your application changes it’s internal state!

You can get the code on GitHub.