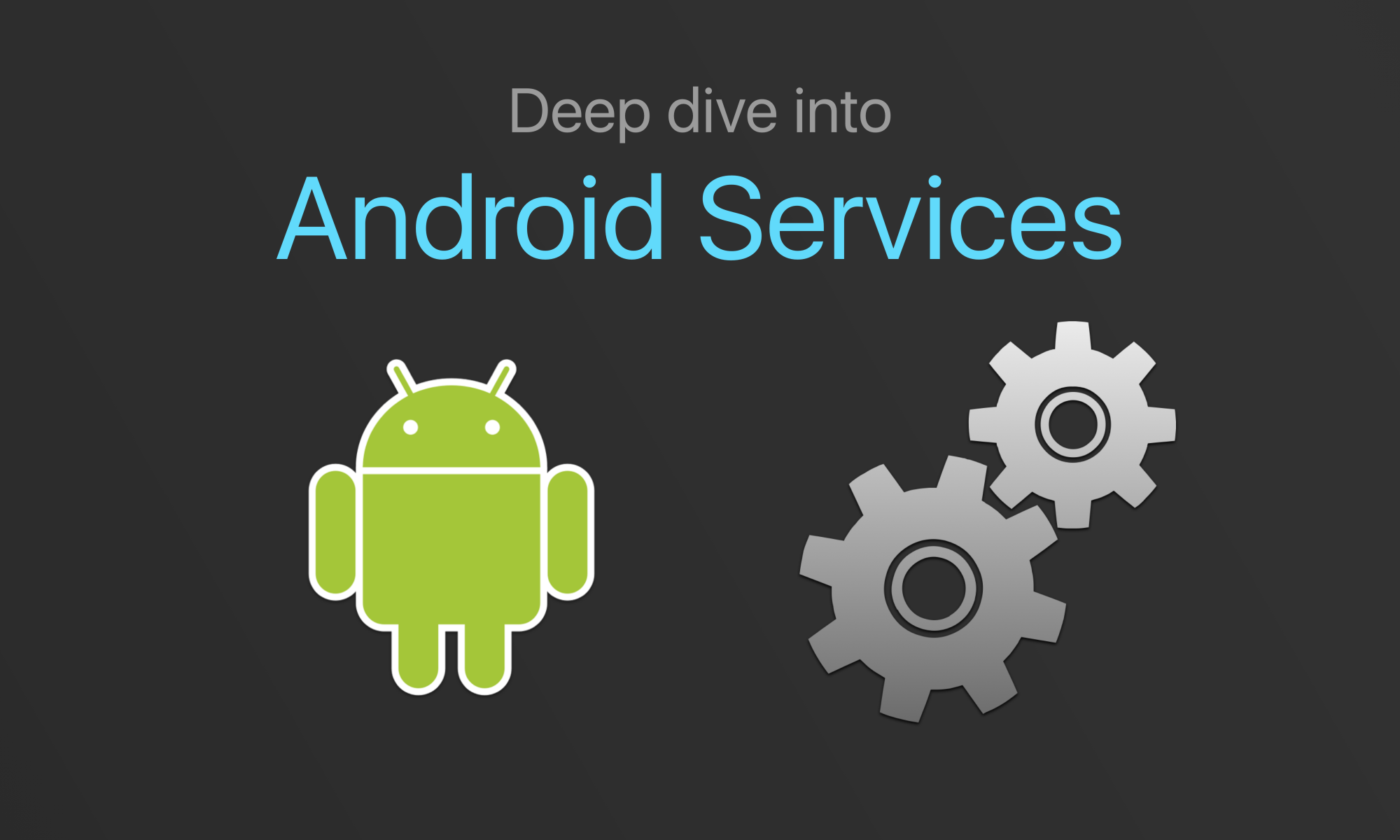 Most sophisticated Android apps have to do something that requires background execution. This means in a Background Thread, and not the Main Thread (which is used for all UI updates).

If you create a Thread or an Executor in an Activity of your app, this leads to unpredictable results, since a simple screen orientation change will disrupt things, since the Activity will no longer be around when the Thread completes its task.

You could use AsyncTask to handle this in an Activity. However, what if your app needs this Background Thread to be started a notification or another Android component?

In these cases, Android Services are the right Android component to use to match up the Thread’s lifecycle with that of the Service’s lifecycle.

A Service is an Android application component without a UI that runs on the main (UI) thread. It also has to be declared in the AndroidManifest.xml. If you want the service code to run in a Background Thread, then you must manage that yourself. The terms background and foreground are overloaded, and can apply to:

In this article, we are going to use the terms background and foreground to refer to the lifecycle of Android components. And when referring to Threads, we will use Background Thread, and Foreground Thread explicitly.

There is a subclass of Service that handles it’s own Background Thread called IntentService which we are not going to cover in this article.

Let’s take a step back and look at a larger picture of what Services are meant to do. Your code that runs in a Background Thread, like a Java Thread or an Executor isn’t really bound to any the lifecycle of any Android components. If you think about an Activity, it has a discrete starting and ending point, based on user interaction. However, these starting and ending points don’t necessarily connect with a Thread’s lifecycle. 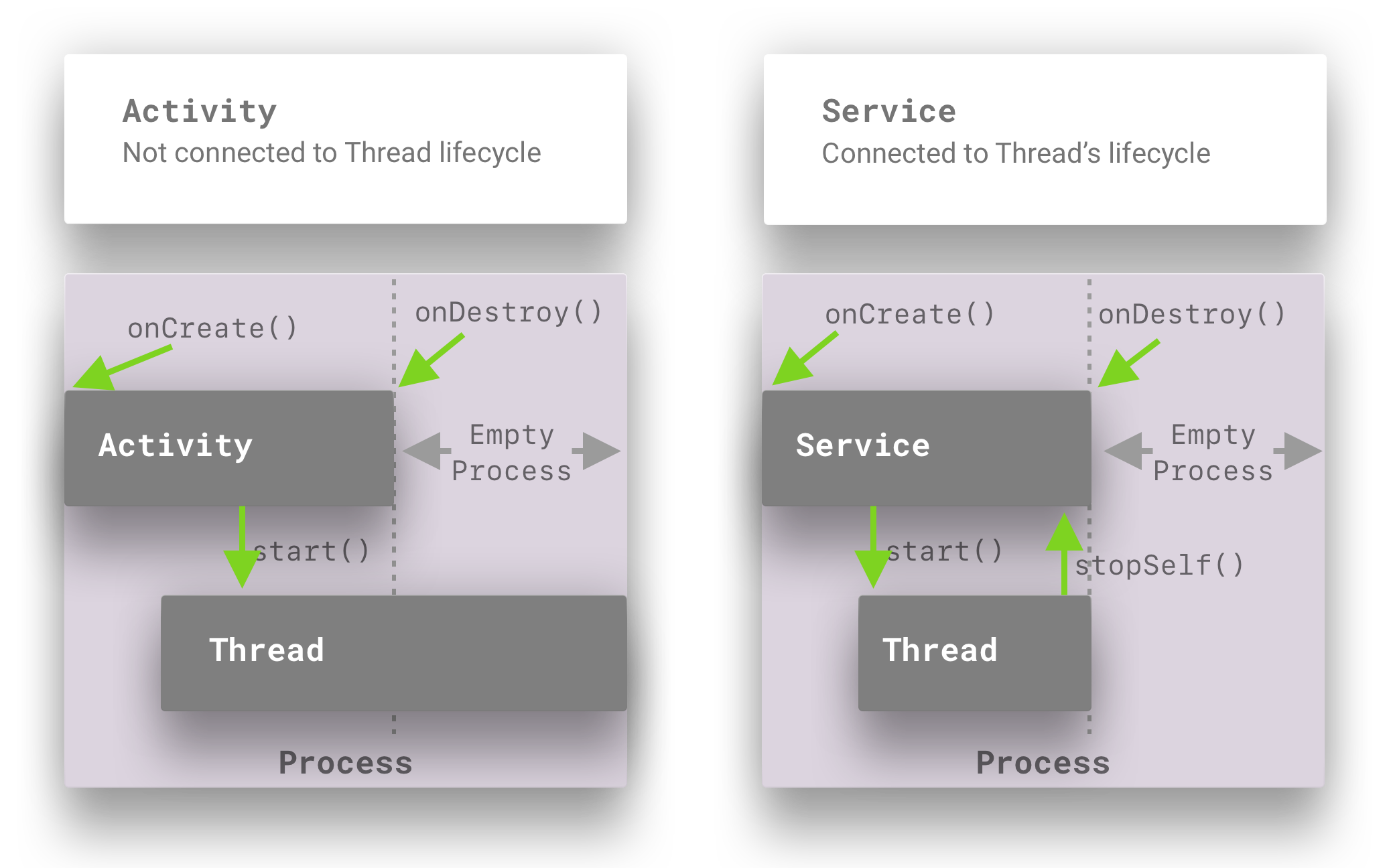 The following are high level points to note in this diagram. The details for all of these points (and clarifications to them) are going to be provided in the rest of the article.

There are 2 kinds of services - Started Services, and Bound Services. And a Service can be both at the same time. We will now cover the behaviors of 3 types of services:

You can put a service in the started state (aka make a Started Service) by calling startService(Intent) method in your Activity or Service. The Intent that you pass must to be an explicit one, which means that you either make a reference to the Service’s class, or you include the package name of your app in the Intent. Here’s some code to create an explicit Intent.

A Service can be started multiple times. Each time it is started, then onStartCommand() is called. A few parameters are passed to this command, along with any extras that are passed from your explicit Intent. Even if you start a Service multiple times, it will only call onCreate() once (unless of course this Service has already been bound to). In order to kill this Service, you have to ask it to stop by calling stopSelf(). When the Service does stop (after you’ve asked it to) and there’s nothing else bound to it, then it will call onDestroy(). Keep this in mind when allocating resources for your “Started Service”.

A “Started Service” is launched with an Intent. And the component that launches the Service doesn’t really keep a connection to it, and if it needs to communicate something to the “Started Service” then it can start it again and pass it a different Intent. This is one of the main differences between “Started Services” and “Bound Services”. “Bound Services” on the other hand follow a client-server pattern. Where the client (Android UI component or another Service) retains a stub (or binder) that it can use to call methods directly on the Service (in this case the server).

Keep in mind that things have changed regarding “Started Services” in Android O. They are no longer allowed to run in the background without having a persistent notification. And the method to start a background “Started Service” in O, is startForegroundService(Intent).

“Started Services” can run in the “foreground”. Again, the term foreground doesn’t apply to whether the Service is running on the Main Thread or a Background Thread. It means that the Android system will give this service highest priority and will try not to destroy it when it is running low on system resources. You should only put a Started Service in the foreground if it is critical to do this in order to deliver a compelling user experience.

Sample use cases are:

When a Started Service moves into the foreground, it must display a persistent notification, explicitly notifying the user that the service is running. This is important because a Started Service in the foreground is detached from the lifecycle of UI components (with the exception of the persistent notification). And there’s no way to let the user know that something is running on their phone without displaying any UI. And potentially consuming lots of resources on their phone.

Here’s an example of moving a Started Service into the foreground.

Here’s the code to display the persistent notifications before Android O.

Note that the PendingIntent piStopService (that is passed to the mNotification) would actually pass an Intent with the Command.STOP integer. Remember that startService(Intent) can be called multiple times? This is an example of that. In order to STOP the service, we are firing an Intent on it via startService(Intent) that will be handled in the onStartCommand() method of the Started Service.

This is why the onStartCommand() of the Started Service needs to be able to handle Intents that might cause the service to stop itself. Here’s some code to illustrate this.

When you want to take your Started Service out of foreground execution, you can call stopForeground(true). This will also take away the persistent notification. However, this will not stop the service. In order to do that you still have to call stopSelf().

To stop a service, you can do any of the following:

Here’s some code samples for stopping a Started Service from an Activity.

In more complex scenarios where the Bound Service might be executing in a different process from the client, a Message handler or AIDL stub would have to be created. However, for local processes, it’s really straightforward.

Here are a list of differences between Bound Services and Started Services.

In either case, if the Service (Bound or Started) needs to send messages to the bound client or whatever component started a Service, it has to use something like LocalBroadcastManager when the the client and Service are local to one process. Bound Services don’t typically connect directly to a bound client component.

In order for a client component (Activity, Fragement, another Service) to bind to a Bound Service, bindService() must be called, with an explicit Intent just like with Started Services.

BIND_AUTO_CREATE is a very common flag to pass to the bindService() method. There are other flags that you can pass. What auto create does is that it calls onCreate() on the Bound Service if that hasn’t happened yet, at the time bindService() is called. This essentially automatically creates the Bound Service upon the first client connecting to it.

Here’s an example of a ServiceConnection implementation.

Let’s look at what happens on the Bound Service side, when a client calls bindService(Intent).

In the Bound Service you have to implement the onBind() method. This gets called only once, when the very first client component connects to this Bound Service.

Here’s an example of this.

The Bound Service creates a mBinder object of type IBinder. So what is this IBinder interface?

Binder implements this interface, and is an Android base class that allows a remote-able object to be created. It implements a lightweight RPC mechanism for high performance in-process and cross-process calls (between clients and Bound Services).

Here’s what a client component’s call to unbindService() looks like.

In the code above, the Activity’s onStop() method is overridden to call unbindService(). Depending on the UX requirements for your app, your client components can bind and unbind to a Bound Service in onStart() and onStop(), or whatever other Android Activity or Fragment of Service lifecycle methods you choose to hook into.

Here’s an example of what onUnbind() looks like (in the Bound Service).

Typically, you will return false. If you don’t, then when the next client binds to the Bound Service, then onRebind() will be called, instead of onBind().

There are many use cases for your app that will require a service to be both Bound and Started. In the sections above, lots of detail have already been provided that highlight the implications to services being both. They usually involve the creation and destruction hooks for a Service.

A Service that is both Bound and Started can have methods inside of that can be called by bound client components. Since a Service doesn’t have to be started for a client to bind to it, this is something that you must be aware of. This means that a client binding to a Service will call onCreate(). If you don’t move your Service to a Started State, then when the client unbinds from the Service, it will be killed and it’s onDestroy() method will be called.

This is what happens with a UI component will bind to the Service and create it. Then at some point the UI unbinds from the Service, and if it’s in the middle of performing some long running task, then it’s onDestroy() will be created and it will be killed. If your app requirements are that the Bound Service should continue running past the end of the UI component’s lifecycle, then you have to start it, move it to the foreground and have it show a persistent notification. This will ensure that the Bound and Started Service will keep running as long as it has to, or until the user decides to kill it by firing the PendingIntent to stop the Service (as shown in the examples above).

In the example above:

Regardless, what the example shows is the Service putting itself in the Started State first, before actually creating the Executor.

Let’s say that commandStart() is called, after a client component binds to the Service. The Service hasn’t been started yet.

Let’s walk thru this code.

When a client component unbinds from your Service, if it is NOT in the Started State then it will be killed and onDestroy() will be called.

Here’s a diagram that summarizes these states and transitions between them for a bound and started service. 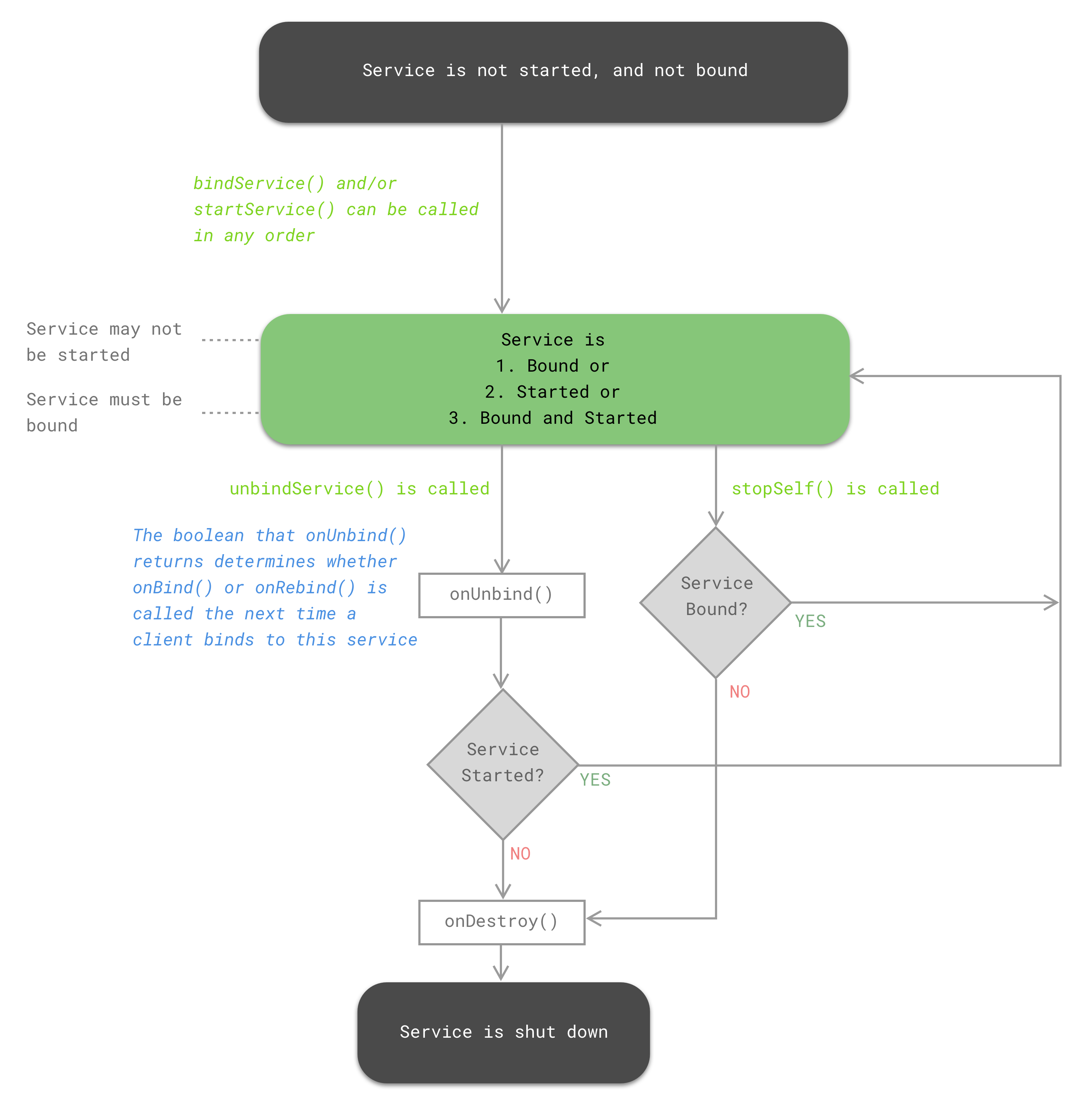 You can see examples of most of the things outlined in this article in the source code for the Awake app. It is a simple utility for Android O and N that keeps your screen on while charging. Here are some links: