If you’ve ever want to incorporate web services into your graphical applications/applets/widgets written in Java, then there are some threading issues that you have to be mindful of, and design around. This tutorial will guide you though some of the important threading issues you have to keep in mind when building such applications. The strategies outlined in this tutorial apply to accessing more than just web services from Swing apps; it also applies to loading information from databases, and performing any other kind of time consuming process that has to happen in the desktop app and interact with it, but can’t make the user interface unresponsive.

For some more background information on Swing applications and threading, read this article - Lesson: Concurrency in Swing. The Swing framework is essentially single threaded, as are most GUI toolkits. The main thread which updates the UI is called the Event Dispatch Thread (EDT). All the graphical components are created by this thread, all the action, event, etc. listeners run in this thread. So if your code performs a long running/time consuming or blocking task in the EDT, then the Swing UI will become frozen until your code is done. In order to prevent this situation, there are other threads that your tasks can use:

In this tutorial, I will cover all three strategies for making your Swing apps multithreaded, with code examples, and things to keep in mind when designing such systems.

Perform a one-shot task, started from the user interface, that only needs to update the UI with the final result of the task. Use a Swing threadpool executor to perform this task (not the EDT). 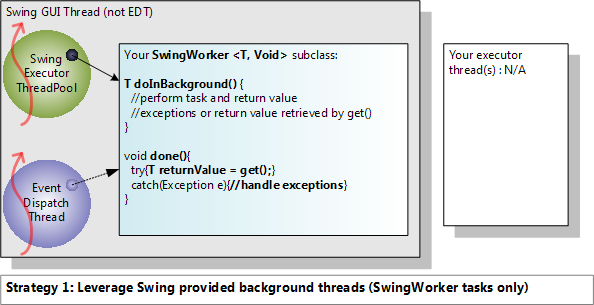 Strategy #2: Create your own threads to perform one-shot tasks, and coordinate with SwingWorker tasks #

Perform a one-shot task, started from the user interface (or not), that only needs to update the UI with the final result of the task. Use your own executor to perform the task (not the EDT, or a Swing threadpool executor). 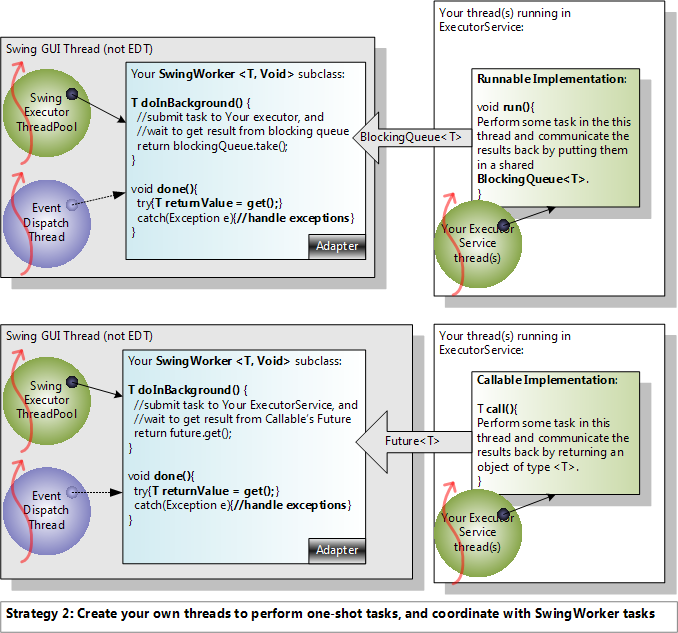 Strategy #3: Create your own threads to perform recurring/long running tasks, and coordinate with SwingWorker tasks #

Perform a long running or recurring task, started from the user interface (or not), that needs to update the UI with intermediate/periodic results from the task. No final result has to be returned by the task (this is optional). Use your own executor to perform this long running/recurring task (not the EDT, or a Swing threadpool executor). 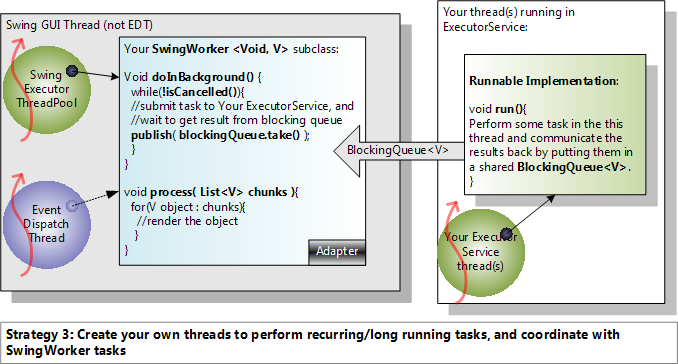