This tutorial is part of a collection tutorials on basic data structures and algorithms that are created using Kotlin. This project is useful if you are trying to get more fluency in Kotlin or need a refresher to do interview prep for software engineering roles.

How to run this project #

You can get the code for this and all the other tutorials in this collection from this github repo. Here’s a screen capture of project in this repo in action.

Once you’ve cloned the repo, type ./gradlew run in order to build and run this project from the command line.

To meaningfully compare algorithmic performance, we can use big O notation – sometimes referred to as “order of growth.” In short, it compares the asymptotic behavior of algorithms; that is, how does their performance scale as a function of the input size?

An algorithm that will always execute in the same time (or space) regardless of the size of the input data set.

An algorithm whose performance will grow linearly and in direct proportion to the size of the input data set. Big O favors the worst-case performance scenario.

The example above demonstrates how Big O favours the worst-case performance scenario; a matching string could be found during any iteration of the for loop and the function would return early, but Big O notation will always assume the upper limit where the algorithm will perform the maximum number of iterations.

Counting sort is an efficient algorithm for sorting an array of elements that each have a non-negative integer key, for example, an array, sometimes called a list, of positive integers could have keys that are just the value of the integer as the key, or a list of words could have keys assigned to them by some scheme mapping the alphabet to integers (to sort in alphabetical order, for instance). Unlike other sorting algorithms, such as merge sort, counting sort is an integer sorting algorithm, not a comparison based algorithm.

Counting sort can be used as a subroutine for other, more powerful, sorting algorithms such as radix sort.

Counting sort is efficient if the range of input data, k, is not significantly greater than the number of objects to be sorted, n.

Counting sort is a stable sort with a space complexity of O(k+n).

O(n^2) (or quadratic) represents an algorithm whose performance is directly proportional to the square of the size of the input data set. This is common with algorithms that involve nested iterations over the data set such as the example below.

Here’s an example of Bubble sort which is also O(n^2). For a list size of 4, this creates 6 comparisons and up to 6 swaps (which is (4-1)!). More info on factorial functions.

Here’s a visual representation of the call stack, showing how the program just recomputes the values for the same things repeatedly. 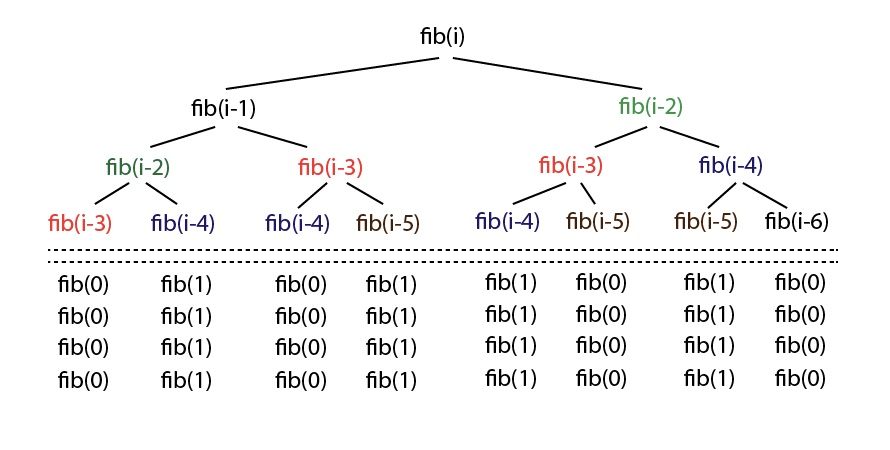 Binary search is a technique used to search sorted data sets. It works by selecting the middle element of the data set, essentially the median, and compares it against a target value.

It will continue to halve the data set with each iteration until the value has been found or until it can no longer split the data set.

This type of algorithm is described as O(log n).

For example if an input data set containing 10 items takes one second to complete, then

Doubling the size of the input data set has little effect on its growth as after a single iteration of the algorithm the data set will be halved and therefore on a par with an input data set half the size. This makes algorithms like binary search extremely efficient when dealing with large data sets.

Merge sort is an algorithm that is n * log n in runtime complexity. It’s a divide and conquer algorithm that splits a given list in half recursively, until each list only has 1 element in it. Then it merges these lists back into one big list by sorting each one of these smaller lists and merging them back up into larger and larger lists.

The following animation visually depicts how this divide and conquer algorithm works on data. It leverages the fact that it’s inexpensive to merge two (already) sorted lists together. So, this algorithm recursively splits the main lists into smaller lists, until each the smallest list just has a single element in it. Then proceeds to merge these lists of 1 element each back into larger lists. Each of these larger lists are sorted as they’re assembled, so this takes advantage of merging two smaller sorted lists into a larger list.

Here’s the runtime of the algorithm visualized on a sample data set. 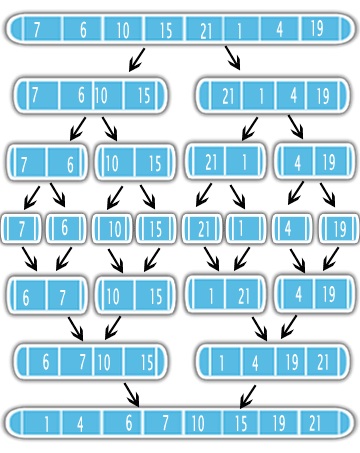 Quick sort is another divide and conquer algorithm with better performance than merge sort. The main difference between quick sort and merge sort is that for quick sort, all the “heavy” lifting is done while the list is being split in two, whereas with merge sort, we simply split the list in two and worry about sorting it later.

Unlike merge sort, this algorithm performs a one pass mini sort on a portion of the list, before splitting it. This is different than merge sort, where the list is split in half recursively and the sorting occurs during the merge phase.

This algorithm has really low memory footprint, since the items are swapped in place in the same array, unlike merge sort, which can take up more memory.

If the pivot point is in the middle of all the values in the set each time, the runtime approaches O(n * log n). However, if it is close to one of the minimum or maximum each time it approaches its worst case O(n^2), although this is rare.

It’s true that the worst case runtime for quick sort is higher (in the case of pre-sorted data, or data that’s inverse sorted), but this case is very rare, and in fact, quick sort outperforms merge sort (on average) for reasonably randomized data. This is due to its cache performance and the simplicity of the operations involved in the innermost loop. Overall, these advantages make quick sort 2-3 times faster (on average) than merge sort for large data sets.