I’ve been working w/ Kotlin to write Android apps for about 1 year now, and I’ve really love it 😍. I’ve also been working w/ vanilla ES6 JavaScript a lot in the past year, which surprisingly has made my Kotlin better (since I’d been a Java developer for many decades prior to this).

However, I hadn’t used both Java and Kotlin on the same app before, so I decided to write the same exact Android app using Java, and also using Kotlin to experience what the major differences would be. This tutorial contains a side by side comparison between Kotlin and Java for the same Android app, which is a simple endless scrolling Giphy viewer.

Video of the app in action #

The app allows a user to see trending GIFs from the Giphy API. It allows the user to search for GIFs. Whether the user is browsing trending GIFs or searching for them, infinite scrolling is supported, so the more they swipe down on the app, 25 images are loaded at a time. Thumbnails of the images are loaded in the RecyclerView, and when the user clicks on an item, a high res version of the image is opened in a new activity and the URL is shortened and copied to the clipboard.

GitHub repo for the Kotlin app

GitHub repo for the Java app

Architecture of the Giphy viewer app # 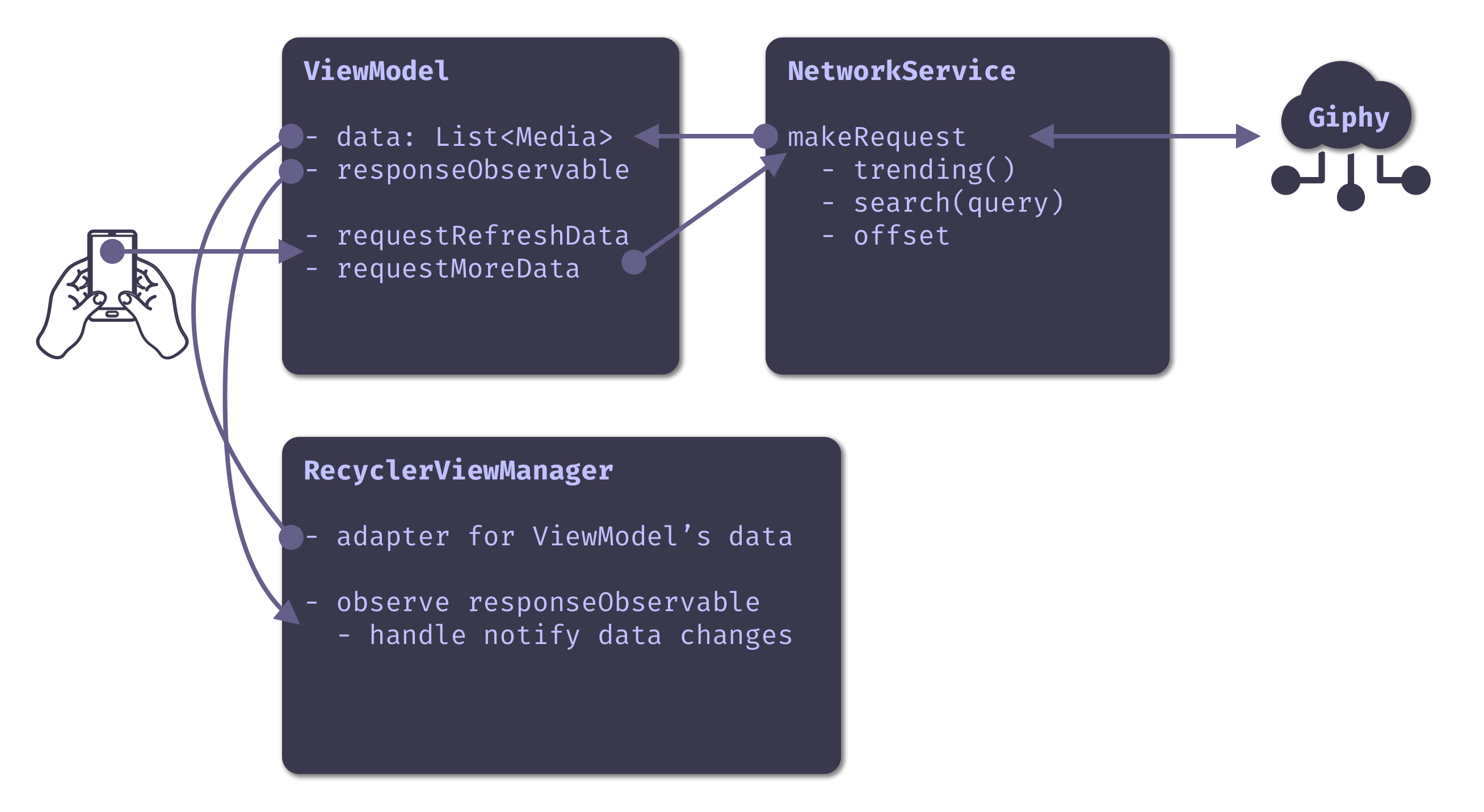 Overview of the Kotlin codebase #

You can get the GitHub repo for the Kotlin app here. 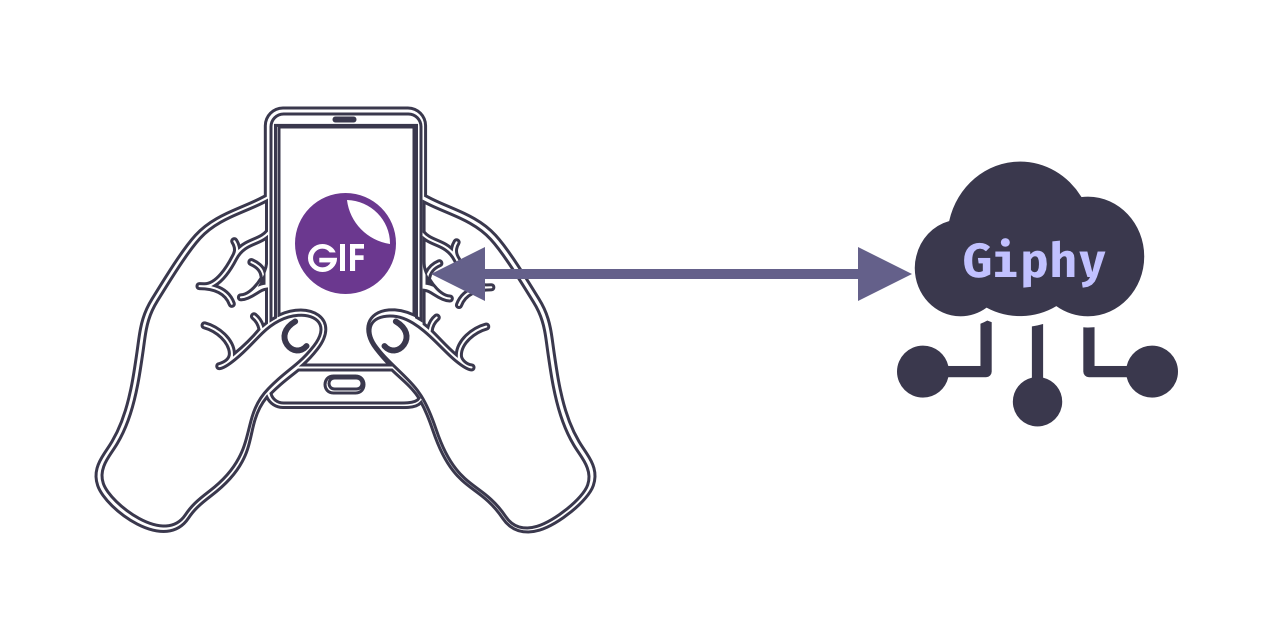 Overview of the Java codebase #

You can get the GitHub repo for the Java app here.

The Java code is setup in a very similar fashion to the Kotlin one. However, there are no unit or instrumented tests in this repo. Here’s the mapping from the Kotlin codebase to the Java one.

Differences between Java and Kotlin #

Also, it really helped that I’m doing a lot of work w/ ES6 (JavaScript) because I was able to think about high order functions and start writing the code w/ this in mind, rather than thinking in Java terms of interfaces and anonymous inner classes. The following are some big differences that I was able to spot in between the Java and Kotlin versions.

One of the biggest wins in the Kotlin version was being able to use sealed data classes, which eliminated so much boilerplate code over Java builder pattern that it was quite shocking.

Here’s an example of a builder in the Java version, which expresses an AppMode which is something that can either be Trending or Searching.

Here’s some code that shows AppMode being used:

And here’s the implementation of AppMode itself:

Whew! That is a lot of boilerplate code to express something that can be done in Kotlin in the following lines 🙀:

Using this is also so much simpler in Kolin (compared to the Java version):

Also, w/ sealed classes, I can also use the when keyword:

Similarly, there’s a DataEvent.java class that gets shrunk in a similar fashion in Kotlin.

And here’s the Kotlin version:

Yup, it’s incredible how much more terse and ‘ergonomic’ Kotlin is to use when compared to Java 🎉.

typedefs and lambdas vs interfaces #

In the Java version, I was passing anonymous inner classes that implement Runnable around to some functions. Here’s an example:

And in the AppViewModel.java class here’s the function that takes the Runnable parameter:

In Kotlin, instead of requiring Runnable blocks to be passed around, I created the following typedef:

And here’s the requestRefreshData() function in Kotlin:

And here’s an example of calling this function:

There are other places where I ended up using another typedef that I created called BlockWithSingleArgLambda to pass lambdas around that simply accepted a single argument.

Here’s an example of it being used in the RecyclerView DataAdapter:

In the lamda that I pass to the DataAdapter I simply use it to reference the argument that I expect will be passed to my lambda.

Here’s an example of this lambda that I’m passing acutally being executed:

This is so much cleaner IMO than having to define abstract classes or interfaces to achieve the same result.

The Kotlin version of the app has a feature that’s not present in the Java version which is that it shortens the URL of the GIF when the user clicks on a thumbnail in the RecyclerView before copying that to the clipboard.

I decided to use coroutines, since I really like ES6 promises and async/await. And while I’ve used AsyncTask and Executors quite extensively in the past, I really like this new approach to async programming.

Here’s an example of a coroutine that shortens the given URL string (shortenUrl() actually does the work of shortening the URL by using a HttpURLConnection that needs to be run in a background thread (and not the main thread):

Here’s code to call this coroutine from an Android activity:

I love using extension function expressions when I can. Here are some examples:

I am still getting used to the ability to do things like Toast.() -> Unit 😁.

Another thing I noticed is that I was able to leverage the terse constructor syntax of Kotlin to make it much simpler to pass arguments, and also defined variables that operated on those variables in the constructor argument list itself, instead of polluting the main function body w/ this code.

Here’s an example where I pull out an imageView from a cellView which is passed to this function:

Another thing that I started using is init blocks and apply blocks in Kotlin code, to put code to initialize a variable where I declare the variable itself.

Here’s an example of using apply:

Here’s an example of using init:

After I wrote this tutorial, I found the following article by the team that created OkHttp talking about their journey in migrating their library from Java to Kotlin. Here’s a link.